… & how to overcome them definitively and forever after.

When doing the Twin Flame work, I have encountered the strangest things, that do not work. I made a list of them in the hopes of this being educational, so that you will be successful instead.

1 The Divine Feminine thinking she is further developed.

That’s absurd, but let’s address it. So, you think you are pretty far spiritually developed already huh. At least a lot further then your Divine Masculine counterpart. Well, let me try to burst your bubble by saying: nope! That’s really in your own interest as well, that I just burst your bubble, because only then you can be open to receive your Union. Sure, perhaps they are momentarily more working in the mental or business aspect and you more in the emotional and relational realm, but the conclusion that the latter is somehow more important, is simply the one reason why you will not progress. True Twin Flames learn from each other; also, they complement each other and are not carbon copies. They are eternally circling around the same core consciousness (level) and finding each other there.

2 Magical thinking that things will move because you want it.

Wanting Union is a start for sure, but things will not move there when you leave things there. Also, when you are putting spells on someone, you are stuck in magical thinking and that will not work in this case, and not in any case really at least not genuinely, as with all manipulation techniques. This is simply the idea of magic turned around; when we would get the right side up again, you could certainly speak of Source Magic and apply it. Things will not move on the outside when you do nothing on the inside. When you do the inner work on your own volition, then you can when that step is completed, certainly seal that result off with a wonderful ritual of some sort. Congratulations!

3 Thinking it is a belief system (only).

That makes it all much too iffy. It is not a belief in the sense of a fantasy. It is not a belief that will be true because of your desire for a larger then life romantic relationship because you’ll have to be real to be able to get it. But if you don’t believe in that love even existing at all, you’ll never be motivated to go the route and the distance at the same time. If you don’t even believe that this love exists and is for you too, you’ll never reach it at all. It is located further down the line of development then most think and that place is often not within reach from the stance of living an average modern life with average mentality and also not from the stance of an enhanced modern mental place that considers itself very spiritual, but because it really exists anyway, you’ll be actually often only be able to go there armed with enough belief. Belief requires trust and that is often lost, so first you need faith and then trust can grow to go the distance, belief will be your personal motivation and you’ll arrive finding out it was factual and truth all along and now you are there.

4 Saying no to genuine guidance.

The difficulty as Twin Flame coach is that you have to say unpopular things and steer people to places they don’t want to go. Also, a real Twin Flame coach can see where in spirit your True Twin Flame is and can get absolute direction for you that for sure sounds like every day guidance that is concrete. This may sound incomprehensible but it’s true. These are directions from the Divine directly. When saying no to such guidance, you basically sabotage your own desire to have it. For sure, a lot of the journey can be self guided, with the right tools. But because we have a blind spot in our core block, a teacher is necessary at certain times.

5 Letting your Twin Flame walk over you.

Last months I have talked a lot with my Twin Flame friends about how sweet me and my Twin Flame moved closer to each other and although that was true, you have to understand that I did that by leveraging my sexual value and leading him to his edge all the time. So if you are a doormat I don’t think you can get the juice, you have to understand that for success! For people that do not feel in the deeper layers directly (yet), it could for sure have sounded more like we were fighting – which was true, we were working out core issues, that made the undertone of Divine love shine forth from underneath it. And we succeeded. That is what really happens, you see. No amount of doormatting is going to get you there, although the inner work is always the whole point in it’s entirety, when done correctly.

6 Not doing the journey yet expecting to have success.

The Twin Flame implies the spiritual journey and when on it you need to also on top of that really start to believe the Twin Flame as Divine love in all ways and want it and choose it! Also – and this is going to sound mysterious to you but hold on as I am in fact revealing a big secret to you here! – it works well to believe the false Twin Flame is the True Twin Flame, because from that place of believing it is more easy to call the True One in. A teacher can guide that process for you, give you well-timed hints and acknowledge when you arrived at the consciousness place of Harmonious Union as well. The process of social-emotional individuation will for many be done over to establish that psychological relationship health as well within the Harmonious Union container, but the consciousness arrival has priority when you look at what a Twin Flame is. I know this may still sound like meaningless magic formulas or even word salad right now, but I couldn’t have given you more profound and true information just like that!

7 Making it a conscious relationship.

What you’re often doing wrong in the Twin Flame journey is, you’re busy puzzling in the social emotional relationship realm – and the solution is at consciousness level, a different level altogether! It can be that when looked closer at this issue, you need to be honest with yourself and say you simply want to make things work with Pete, and you are not TRULY interested in the True Twin Flame in itself. That is okay, but not my work. You are basically knee deep in the wrong blog post right now.

8 You believe false situations are the truth.

Your state of consciousness Harmonious Twin Flame Union can be lost again when you have an imbalance plus fall for thinking it is not an imbalance but truth itself. So you for instance try to hide behind your man or he tries to install you as his mother and god; balance here can be restored when you let the third energy between you truly lead fully and only. That harmony then holds also proper space for healing temporary imbalances that are probably alternating him and her for a while, especially in the beginning of Harmonious Union. These healings are then completed inside that third energy in the direction forward, when you keep on maintaining that, otherwise you will grow askew, fall out of it and also simply have a psychologically not-whole relationship in some way, not emotionally matured and individualized. So: spiral up, not down, by keeping your vision on where you are going, which is Harmonious Union and within that a healed mental, emotional and physical life as well.

9 Not cultivating your part of the inner peace.

Inner peace in your Union does not depend on the other. Start to cultivate the qualities you want to be for your Twin Flame in your relationship in yourself. What are those for you? You may want to brainstorm them and be creative in finding what that is for you. You are the sign and symbol of Divine Love for them as they are for you. That is a Divine Marriage. 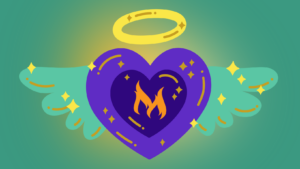